Age is just a number: The truth about young whisky 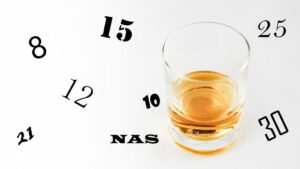 Picture from Whisky and Wisdom

We Recently came across this article about the misconceptions of whiskey and the aging process and with a bunch of us craft distilleries using some form of accelerated aging we wanted to share this article with you all.  This is an article written by AD at Whisky and Wisdom and can be found at their website www.whiskyandwisdom.com.  Enjoy!

Age is just a number: The truth about young whisky

an article by AD from Whiskey and Wisdom

You’ve probably heard the saying, “You’re only as old as you feel.”   It’s often accompanied by its well-worn colleague, “Age is just a number”.   And when it comes to whisky, never a truer word was said!

In the context of whisky, your perspective on a bottling’s age is probably a function of when you started drinking the stuff.  If you got into whisky more than 30 years ago, then a whisky’s age statement wasn’t much of a big deal to you.  The vast majority of whisky available and being consumed was blends without age statements, and for the enlightened few who had discovered and preferred single malts, the small number of distilleries available showcased their whiskies with humble age statements typically between 8 to 12 years.

If you were introduced to whisky around 20 years ago, then you benefited from the spoils of the “whisky loch”.  Over-production in the late 1970’s and early 1980’s came unstuck in the mid-1980’s when the industry virtually collapsed – leading to the closure of almost 30 distilleries between 1983 and 1987.  With excess stock and a greatly downsized market, the casks laid down prior to the crash were left alone to age.  By the late 1990’s and early 2000’s, there was a veritable oversupply or “loch” of aged, affordable whisky, and your perception of old whisky was possibly unfairly skewed – it was abundant and priced accordingly.  Distilleries and brands released 21yo, 25yo, 30yo, and 40yo whiskies, all at prices that we shake our head at today:  Vintage releases of Macallan 1946 and 1948 for just $350.  Macallan 30yo for $300.  Glenfarclas 30yo for $250; Glengoyne 21yo for $75.  The famous Black Bowmore for $290!  (All quoted prices as per Australian RRP between 1997 & 2003).   And it seemed most distilleries had a 12yo, a 15yo, and an 18yo in their portfolio – with not a huge or disparate difference between the youngest and oldest expressions.

If you’ve come into whisky more recently, say in the last one to nine years, you’ve been confronted with a very different situation.  The single malt category has exploded; the whisky loch dried up years ago; the cost of sherry casks went through the roof; and the market completely transformed and changed – internet sales, auctions, the secondary market, collectors and “flippers” led to distilleries and brands realizing there was a market for uber-premium releases that could be priced in the tens of thousands of dollars.   In a nutshell, two things happened:  (1) aged whisky suddenly became rare and expensive, and (2) we witnessed the rise of the NAS whisky.  (NAS = No Age Statement).  For reasons of both affordability and availability, recent converts to whisky also have an unfairly skewed view of old whisky, but their mental skew and reasoning is inversely based and driven to that of the drinkers who benefited from the whisky loch 20 years earlier.

In today’s whisky world and market, there is now an unfair and somewhat unjustified glorification of old whisky.  Whiskies north of 30 years old are held up as venerable beacons; worshiped as untouchable achievements in distilling that should be admired, not drunk.   Many consumers, sadly, still equate price with quality, and the high price commanded by older whiskies has led to the misguided belief that “older is better”.   Some drinkers shun the NAS releases, not bothering to get out of bed unless their whisky has an age statement of 12 or 15 years!  But older whiskies now come with price tags that preclude a large portion of the whisky-drinking public.

The sad thing here is that such people are robbing themselves of some stunning whisky.  And to understand this further, we only have to turn back time…

The fact is, 30 years ago, we were generally drinking young(er) whisky.  The biggest selling whisky in the world, Glenfiddich’s “Special Reserve” was for many years bottled as an 8yo.  Eight years was evidently a significant number in the 1970’s and 80’s, with many other single malts bottled as an 8yo.  10yo and 12yo releases were considered “extra aged” !   No one was complaining at the time, but somewhere along the way, we’ve lost sight of the fact that whisky less than 10 years old can still be a delicious and wonderful experience.

More importantly, much has changed and been learned about whisky production and maturation in the last 10 years, to the point where younger whisky can “taste older” than we’ve traditionally become accustomed to.  The late Dr Jim Swan was instrumental in helping new distilleries start up and produce whisky that – quite simply – matured faster.  A better understanding of cask/wood science and maturation has also led to some distilleries producing incredibly tasty and drinkable spirit at ages that, just 15 years ago, would have been considered too young to bottle.  Ardnamurchan’s “AD” releases, Glasgow Distillery’s “1770”, and the recent SMWS bottlings from Eden Mill are just three examples of extremely impressive spirit that, at three years or younger, are perfectly drinkable and delicious bottlings.

Up until 15-20 years ago, there was a perception (and reality) that whisky had to spend longer in the wood because there was less understanding about the science of maturation and – generally speaking – a distillery’s wood management regimen was less planned, strategized, and executed.  Today, however, distillers have a much greater understanding of wood; cask quality is better than it’s ever been; and an increasing amount of spirit is filled into 1st fill barrels.  Casks that once may have been re-filled three or four times without treatment are now being re-rejuvenated (via a de-char/re-char process) after just two fills.  What it all means is that whisky is maturing faster and getting to better levels of maturity than it may have just a decade or two ago.

But there’s something else going on that your taste-buds need to be aware of….

As whisky spends more time in the cask, the original character and tone of the spirit is lost as the oak overtakes and consumes.  Younger whiskies thus better display the character and house style of a distillery.  After 20 years in wood, two different whiskies – say two Speysiders – will be harder to discern and identify, as the distillery’s original DNA or fingerprints have been obscured by the oak.  However, at eight or nine years old, a knowledgeable palate will readily detect, say, the meatier, more robust spirit of, say, a Mortlach or a Craigellachie, from the light and fruitier spirit of Cardhu or Glen Moray.  At these younger ages, the spirit can be more vibrant; free from tannins; and free to display the distillery’s character.

Islay fans also should take this onboard.  Peat in a whisky – as measured by phenol’s in parts per million – diminishes with years in the wood.  Whilst everyone drools and salivates over the prospect of a 25yo Laphroaig or a 30yo Bowmore – and, believe me, they are delicious whiskies – they’re not particularly peaty or smoky.  Those who love their big, bombastic peat and smoke bombs should focus on whiskies that are 10 years or younger.  Some of the recent releases from Bruichladdich, Lagavulin, and Ardbeg bear testament to this.

Lest this message be misconstrued, do not interpret these words as an advertisement for young whisky, nor a subliminal message that old, aged whisky is flawed in some way.  Far from it.  But you’ve got to play the odds:  Yes, whiskies that are 25, 30, 40, and 50 years old can be equally delicious – but (i) it’s a different type of delicious, and (ii) there are far more misses than hits.   Paying $100 for a young whisky and being disappointed is one thing.   Paying $2,000 for an old whisky and discovering it’s dry, tannic, over-oaked and should have been bottled 10-15 years earlier is a whole other level of disappointment.

Age is indeed a number – but don’t hang your hat on it.  And certainly not your dram.